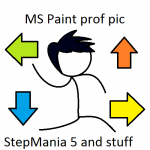 Hello. I'm here looking for feedback on my first SimFile. Feel free to give me any feedback or criticism. Tell me what I did right and what I did wrong. I'm looking to improve. Here's the download link. And here's a video showcasing it.

For a first stepchart, I cannot say that it's necessarily "bad." What's come to my attention is that your song you've stepfiled overuses a lot of 12th notes when not needed (on 16th fills). You should snap to 16th notes so it sounds better on the 16th (quarter-note) fills. Same thing for 12th (triplet-note) fills, add 12th notes. I can also conclude that your chart's BPM is off.

When you create/edit a song, make sure to turn on "assist tick" in the song options so you can hear what's "off" with your notes.

First thing I do when I start a new chart is find out the correct BPM. For popular songs, you can use a song BPM search tool to find out its BPM. However in your case, this song doesn't exist in the BPM song database. Your next option is to use an online tempo tool. The correct answer by the way is 155 BPM, experiment with this site yourself, it's a pretty fun tool. Looking back at your chart, you have a BPM incorrectly set to 150 instead.

Next thing your offset. Going into the editor of your chart, the song starts at measure 1. It's not really important to start your song at measure 0, but it just looks better like that. Say you didn't want to move all the notes to the top to measure 0... In your case with assist tick on, listen to the song and the "tick" of your notes at the same time at measure 1 (starting point). Does the tick sound early to you? Does it sound late to you? If it's early, press F11 a couple of times and preview your song. Same thing if the "tick" sounds late, press F12 a couple of time and preview your song. Do this until the "tick" is perfectly on sync with the song.

Assuming your BPM is set correctly and your offset is as well, we'll move onto the snapping of the notes. Here's one thing I want you to do on the editor. Go to options, and set the song rate to 0.3x. This is a gameplay option, not a permanent song modifier, and you can change it back after (even though it'll do it itself after you've left the song editor). This will slow down the song, so you can hear it in slow motion. Start the song and listen to the notes "tick" in the beginning. Notice that the "tick" seems to go faster than the song itself? This is because the song itself uses quarter notes instead of triplets. You've used 12th (triplets) instead of 16th (quarter notes). Erase those notes with the "red, green, green" and replace them with the 16th snap so it shows it as "red, yellow, blue." Preview the song again at rate 0.3x with assist tick on, and notice it sounds perfectly on-sync with the song.

Try this practice on the rest of the song and I'll guarantee you that everything will sound perfect. Sorry if I couldn't explain some of these parts clearly. If you have anymore questions, feel free to reply.

Happy stepfiling!
Hoping to be more active in the stepfile sharing community... Don't know when that's going to happen. Find me on FFR, SMO, other social media sites by @Acela944
Reply
1
Subscribe
4814 Views