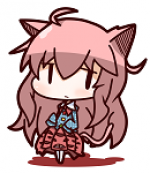 If you need more time than just take more time, no one's gonna hate you for it lol

Finally, after more than a month, Set 4 is COMPLETE! WOOOOOO

Anyways, on to Set 5~! There's no stopping now, I have a whole bunch of songs I want to get done! Hopefully you'll all stick with me as I make this journey. Since I'm on spring break now, I'd like to take some time off and relax...but trust me, I don't plan on taking another month to complete the next Set! (I think...)
MisterGreenBean
Stepping dangerously

Set 5 is up, finally! Thankfully I just made it before the one-month mark. Woot!
A few updates to old songs came with this one as well, particularly in difficulty classification due to the update that Stepmania got as I was making Set 5. For those who are too lazy to find the differences, I'll leave the list of changes her:


With the end of the school year approaching (for me, anyways) I'm probably not going to have Set 6 for a while. I know I keep making you guys wait for these, but I just ask for some patience. Once summer gets rolling I'll probably be able to pump these out in record time. Thanks for understanding, and please stick around for updates!
MisterGreenBean
Stepping dangerously

Welp...looks like I screwed up. Somehow I lost all the data on my Easy, Medium, Hard, and some Novice charts when I uploaded them onto Zippyshare. I have no idea why this happened and there doesn't seem to be any way of recovering them. As such, I've removed the link to Set 5 as I have to do a good majority of the Set all over again, which really freakin' sucks. Well, for those of you are okay with just Expert charts, this should keep you satisfied for now. I'm really ticked off considering I didn't do anything wrong and yet something like this happens, but hey, I guess that's just the way the cookie crumbles.

As such, here's my new plan. I'm going to withhold Set 5 for a bit as Expert chart production on Set 6 has already begun. I will work on Set 5 alongside Set 6, and I'll release them together as a dual feature. This does also mean that it's going to be an even longer period of time until I'm finished.

In light of the current situation, I've also considered not doing Novice or Easy difficulty levels at all, as I'm beginning to find them dull and pointless. Medium is the lowest difficulty that seems to actually "matter", as Novice and Easy difficulty levels are more or less simple quarter-note charts built for the sake of simplicity and easy AAAs and AAAAs. I feel like it undermines the point of the project and I don't particularly enjoy doing them. As such, with the next update, unless there is some objection to the matter, I will be removing all Novice and Easy level difficulties from all songs henceforth. Remixes will still only be Expert difficulty.

If there are any objections to that which I have laid out, please feel free to say so, as I want you guys to be happy playing the charts. I just think it'd be better as it allows me to spend less time on each song and thus increases my productivity without really reducing the chart quality as a whole. But if there is a demand for them, I will keep them around.

Thanks for your patience and understanding.
MisterGreenBean
Stepping dangerously

Finally! After two months of pain and work, I finally managed to complete Set 5 and 6 and reformat the rest of the Sets! Woot! Here's how things are now:

All songs have three difficulty levels: Easy, Medium, and Hard. Easy's the same as it was before, Medium is a completely new chart using the old Medium, but made slightly more difficult. Hard is the successor to what was once Expert; all Expert charts were transferred over to Hard. In doing so, I went ahead and polished up some of the old works. If you want the most up-to-date charts, I'd suggest re-downloading all six sets.

With that all said, now I'm going to get onto work on Set 7. With summer vacation in full swing, I actually have lots of time to do this now!
MisterGreenBean
Stepping dangerously

Now that it's summer and I have way more time on my hands, I've gone ahead and put up Set 7. It's another themed say, hurray!

And now, I am immediately going to begin production of Set 8. Be back in hopefully two more weeks' time!
MisterGreenBean
Stepping dangerously

Huh. I thought I posted here when I uploaded Set 8. Guess I forgot. Well, Set 8's been up since a few days ago, so enjoy!

Sets 9 and 10 will be another double feature to commemorate 50 songs! And trust me, these upcoming Sets won't be easy...
Nuckols

First I wanted to say thanks for all the sim files! I am glad there are still active anime sim fans around. I will say though, for those of us who don't use bars to play, some of your Heavy level steps are incredibly difficult to meet and I consider myself pretty good and AA'ing most every 9 step song. I couldn't even last through the intro beats of Sugar Song Bitter Step without using a bar which made me a bit sad. Again though, thank you for the sim files!
Reply
Prev 1 2 3 4 Next >
Subscribe
32196 Views